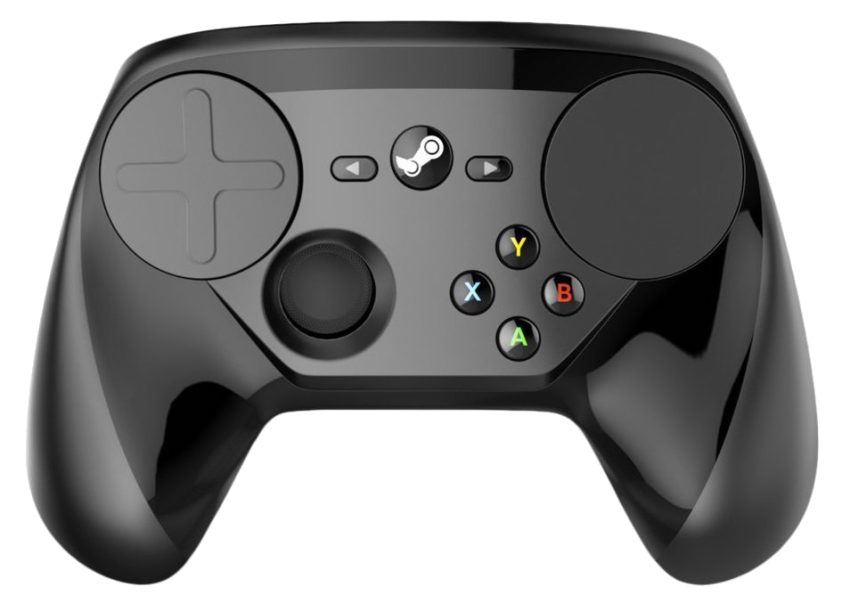 The Hardware
First let’s talk about the controller itself.  The controller has a big Steam logo button in the center to bring up the Steam overlay, which is especially nice in Big Picture Mode (Big Picture is the view designed for TVs – everything is laid out so that you can navigate without a mouse.  The Steam Controller really is made for use in Big Picture.)  There are two more buttons in the middle as well as a standard A/B/X/Y.  Then there are the triggers.  There are two main triggers, and they’re beautiful.  They’re incredibly smooth and responsive, and also two-step.  There are two bumpers above the triggers (also standard) and then two “grips,” which you press with the three fingers you’ve got curled around the controller.  It’s different but actually quite nice.  The differences get bigger from there.  The Steam Controller only has one stick, instead of a conventional two.  Those two circular areas are touchpads.  Simply put, these are fantastic.  Even before you plug the controller into your computer, they’re almost awe-inspiring.  Moving your finger across the pads activates haptic feedback.  It feels like the pad is a moving trackball, and it sort of “clicks” as it rolls.  Flick your finger across it quickly, and it has inertial and keeps giving you feedback as the “ball” keeps spinning and then slows to a stop.  It’s pretty cool, and it only gets better in-game.  One of the things I hate most about playing a first person shooter with a controller is how the camera works.  You have to push the stick to move the camera, and then pull the stick back to stop moving it.  Compare this to a mouse, where you just push the mouse where you want to look and then just stop.  Stop moving the mouse and the camera stops moving.  It’s more intuitive really.  The touchpads recreate this experience beautifully.  Moving your character with the stick and moving the camera with the touchpad is a great experience.  And that’s not even the coolest part about camera control.  The Steam Controller also has a gyroscope, which means you can also aim simply by pointing the controller.  This sounds confusing, but trust me, it becomes natural quickly.  You use the touchpad to look around and the gyro to fine tune your aim.  Still not sold?  You can set it so the gyroscope is only activated when you’ve got your finger on the right pad (or the left pad, or the trigger, you decide), so you’ve can only activate the gyro when you’re all zoomed in and ready to snipe someone. 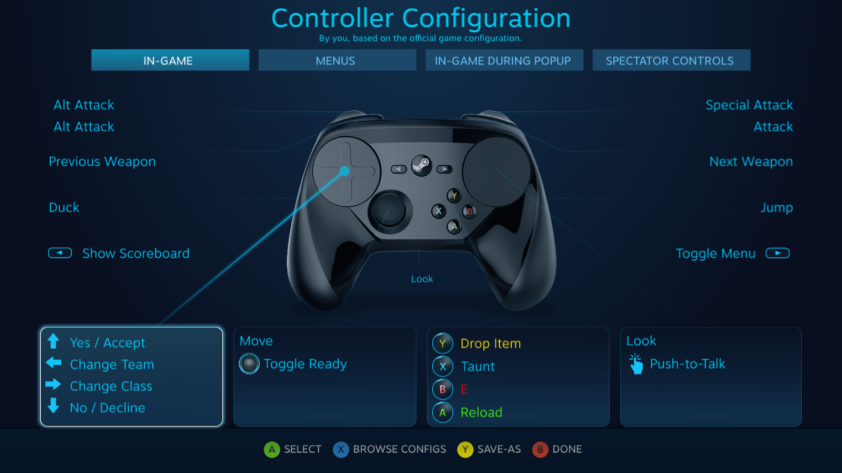 The Software
Talking about customization brings me to the software for the Steam Controller.  Steam wanted to make sure that you could use this controller for any game, which means the configuration is stunning.  Many games have controller support built in, meaning you can assign buttons to in-game actions, like “Attack” or “Jump.”  If your game doesn’t have support, you can emulate any button on the keyboard, mouse, or controller, like “Left Mouse” or “Space.”  Or you can configure a combination of controller and keyboard commands, to make sure you cover everything.  It takes a little bit of effort to set up, but then it’s amazing.  If you don’t feel like configuring it all yourself, you can browse configs that other Steam users have uploaded, and then customize from there.  It’s pretty awesome.  In addition to being able to customize each button, the triggers, touchpads, stick, and gyro are all unbelievably customizable.  Things like sensitivity and haptic feedback can be adjusted, and that’s only the beginning.  You can set the stick to automatically hold down the sprint button when you press it all the way forward.  Or you can set the touchpad to act as a stick when you’re in the game, but as a mouse when you press the other touchpad, for navigating menus.  You can set the trigger to activate walking (as opposed to running) when you pull it down halfway and crouching when you pull it all the way.  The possibilities are endless.

So long story short, the Steam Controller is an incredible piece of hardware, and the software behind it is just as good.  The good folks at Steam have clearly put an astonishing amount of thought into everything about this controller, from the hardware to the software, and it shows.  I’m thoroughly impressed, and I would recommend this controller to anyone.  ••