About a month and a half ago, I purchased a LifeTrak Move watch.  I bought this product primarily as a step counter.  I had tried using an iOS app for this, but it drained my battery and it was a pain to have to always have my iPod in my pocket.  I had looked at the FitBit, but I didn’t have a good reason to spend $100 (or more) on a tracking device.  The Move, on the other hand, gave me many good reasons to purchase it.

The first reason is simple.  LifeTrak is a lesser known brand than say, FitBit or Nike, so I was able to get a good deal on eBay.  Obviously, the more popular and well known a product is, the more demand, and the higher the cost (even when purchasing on eBay and not retail).

The second reason is the main thing I love about the Move.  Almost all wristband activity trackers are just that, wristbands.  They have screens, but you usually have to press a button to turn the screen on.  The Move’s screen is different in that instead of being an OLED screen like many trackers have, it’s a small black LCD (like most cheap digital watches have) that’s only backlit when you press a button.  As a person who already wore a watch, I did not want to wear another device.  On the other hand (no pun intended), a device that required me to press a button to see the time was hardly a watch replacement.  The Move’s simple display is always on, so I still have the ability to glance at it and see the time.

This display is the reason behind another strength: battery.  Many activity trackers have rechargeable batteries; the Move uses a simple cell battery.  Supposedly, this battery will last for up to 14 months.  The cost and trouble of replacing the battery less than once a year is well below the trouble of having to charge it.

Of course, so far I’ve talked only of the design.  As far as functionality goes, it seems to count steps accurately enough (I’ve done short counting tests, but I certainly haven’t counted a whole day’s steps to compare!).  The watch gives steps, distance, and calories.  A bar at the top of the screen shows progress towards your goal.  The calorie counter is well thought out, as it adds in your basal caloric burn rate throughout the day, meaning the number on the watch is not just exercise-based calories, but a real-time total.  The watch keeps a 7 day history of all this data.  There is also a “workout” mode – think of it as a trip odometer as opposed to an odometer.

There’s also a few other features that I don’t use much.  The watch can take your heart rate – you just hold the button and it reads the rate from your finger and wrist.  This works OK, sometimes it can’t seem to get a reading.  The instruction manual says it works better if your wrist is slightly wet, after washing your hands, for instance (LifeTrak says the Move is waterproof up to 90ft.), and this seems to be true.  The watch also has Bluetooth, and will sync with the Argus App (another product I’d recommend).

My only complaints are that the watch doesn’t have an alarm (vibrate or otherwise), and that it seems to shortchange me on distance.  Even though the step count seems pretty accurate, when I walk around the block the distance is shorter than what Google says it is.

All in all, I love the watch.  It’s unobtrusive, looks pretty good, and does what it says it will.  Now if only every gadget I had did that…  •• 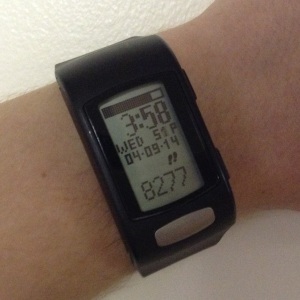