Two weeks ago, I started writing a post detailing some new apps and workflows I’ve started using over the past year.  It was originally going to be one post, but it quickly became clear that 2Do was going to need a post all to itself.  So I’ve decided to make each new workflow into it’s own post.  Today, I’m going to talk about Notability. 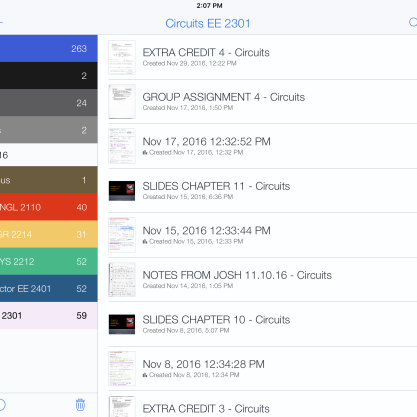 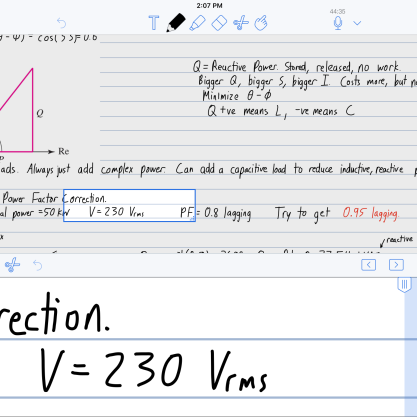 The zoom feature for writing with a stylus 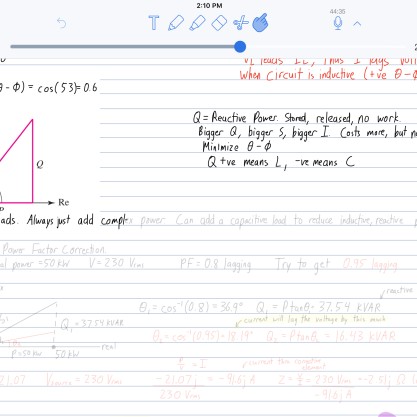 Playback of a note’s recording 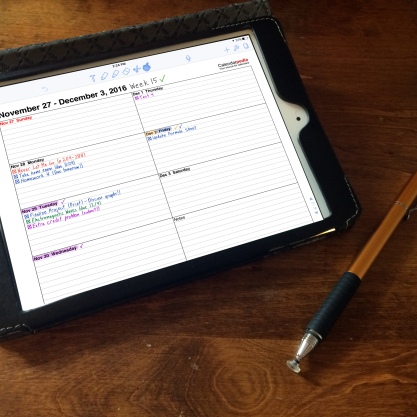 KSU black and gold!
Easily the biggest new app I’ve started using this year is Notability.  Notability can technically be used as a text-based note app, but it’s really designed for use with a stylus.  I’ve officially given up paper in the classroom in lieu of taking notes on my iPad.  I’d messed around with this app before, but never actually gone all in with it for school.  However, my girlfriend and her sister both swear by it, and they convinced me to give it a try.  A week or two before fall semester started, I picked up a decent stylus on Amazon, and created a folder in the app for each one of my classes.  I’ll never go back to taking notes on paper ever again.  From the ability to use different colors, to the straight line tool, to copy and paste, Notability is simply a better way to take notes.

Notability offers many features that make it a fantastic experience.  First of all is the fact that I can write and highlight in multiple colors.  No more muddied diagrams with way too much information penciled in.  I can now draw or highlight different parts of a diagram with different colors, and then explain each part with the corresponding color ink elsewhere on the page.

Speaking of diagrams, I can import pictures and even entire powerpoints and documents into my notes.  If a diagram is too complicated for me to draw well (or if I’m just feeling lazy), I can simply insert the one my professor used on their slide.  In class, instead of wasting time trying to meticulously copy diagrams, I can actually focus on what the professor is saying (novel concept right?) and write that down, and then just leave a blank space in my notes to paste the graphic in later.  This makes my notes a lot more coherent and useful.

The final big feature of Notability is that I can record an entire lecture and my notes sync with the recording.  This means that I can play a recording back and watch my notes replay in real time.  I can also tap on a specific part of my note and the recording will jump to that spot.  So if I miss something my professor said, I can just put a big star in my note and easily come back to it later, I don’t even have to bother noting the time.

Notability is $9.99 for the iPad and iPhone version, and then another $9.99 for the Mac app.  However, I’ve been able to get by without the Mac app.  I’ve set notability to back everything up to Dropbox in PDF form, so while I can’t edit notes on my laptop, I can at least view them, and that works for me.  If you do a lot of writing on paper, you should really give Notability a try.  You may not think you’ll like it – I was adamant about the superiority of paper notes for a long time – but trust me: this is the 21st century.  There are much, much better ways to take notes.  ••

Yes, you read that correctly.

If my research is correct, Apple hasn’t had a spring event since 2012 (when they unveiled the 3rd generation iPad, in case you were wondering).  However, Apple is all set to have their latest press event on March 9.  If if we weren’t already sure that this event would showcase the Apple Watch in full detail, the title of the event, “Spring Forward,” certainly confirmed it.

So what exactly is going to happen at this event?  There are lots of rumors swirling around, but I’m guessing that we’ll see at least two if not three new things.

Apple Watch
First and foremost is, obviously, the Apple Watch.  This was unveiled at an Apple event last September, but we there’s still a ton of stuff we don’t know about the Apple Watch.  The most notable detail is pricing.  Apple told us last September that the Apple Watch would start at $349.  However, that doesn’t clear things up as much as you might think.  Let me explain how complicated the Apple Watch Product line is.  There are three main models.  The flagship one is simply called the Apple Watch.  This is the mid-range model, available in silver or black stainless steel.  My guess is that this model will be somewhere around $500 – $700.  The second model, the Apple Watch Sport, is the cheaper one.  Also available in silver or black, this model is aluminum and has a rubber watch band.  The aluminum and rubber mean that this watch is the more durable one, living up to its “Sport” name.  This, for sure will be the one that starts at $349.  However, I’ve neglected to mention that there are also two sizes to the Apple Watch.  These could be differently priced (like the iPad), or they could be the same, since it seems one is geared towards women and the other towards men.  So, as you can see, Apple Watch pricing is far from definitive.  But I haven’t even talked about the last model.  The Apple Watch Edition is 18-karat yellow or rose gold.  This model is Apple’s attempt to enter the fashion industry.  All bets are off as to what the price of this model will be, but I think it’ll be $10,000 – $20,000.  This sounds absurd, I know, but Apple is shooting for the super high end market.  Think Rolex here.  The Apple Watch Edition isn’t just aiming for the high end consumer market, it’s aiming for the people who have so much money to just throw away that they buy the most expensive watch they can find just to show off.  I’ve given prices for each model here, but they’re really just educated guesses.  You can bet that a good majority of my post next week will be devoted to Apple Watch pricing.

MacBook Air
There was a story a few months ago in 9to5Mac which contained supposedly leaked information regarding the latest edition of Apple’s MacBook Air (the low end of their laptop line).  People have been clamoring for a retina display-equipped Air for years now, and it seems like they may finally get it.  If 9to5Mac’s sources are correct, the new model is 12″ across, but it reduces the size of the bezel to keep the screen size of the current 13″ model.  However, the most revolutionary part of this rumored model is the fact that it only has 2 ports: a headphone jack and a USB-C connector.  What is USB-C?  It’s a new type of USB technology which can not only connect peripheral devices but also deliver power to the laptop.  This of course opens lots of questions.  How do you (or can you) charge your laptop and sync your iPhone?  Is there an adapter to buy?  I don’t know for sure if we’ll see this device next week, but I’m guessing we will.

iPad Pro
The last device we may see next week is a 12″ iPad Pro.  Larger than the current 10″ iPad Air line, this model would include a stylus and cater towards creative professionals.  Apple has historically pooh-poohed styluses, and because the iPad’s screen isn’t designed for the increased precision of styluses, third-party styluses just don’t perform as well as, say the Surface‘s stylus.  I see a lot of people take notes on Windows Tablets at SPSU, so I know that this is a feature people are interested in.  I’m less inclined to believe that we’ll see this device next week (I’m guessing it’ll come in the fall), but it is possible.

So long story short, this week is going to be an exciting week for Apple.  I’ll be back next week with a recap of what happened, which will most definitely include lots of details about the Apple Watch.  Stay tuned!  ••